Terry Lowry is a conservative Christian Talk Show host who has been on the air for many years, and who was kind enough to have Fr. John Whiteford on his show to talk about the plight of persecuted Christians in the Middle East. You can listen to the show by clicking here.

It starts off talking about Orthodoxy, because he was curious to know more about it, and then moves on to what is going on in the Middle East and what we can do about it.
Posted by Fr. John Whiteford at 4:49 PM No comments:

Audio of the Town Hall Meeting on September 5th: The Silent Holocaust of Christians in the Middle East

Audio of the meeting is found here:

The audio of Fr. Bashar Al-Shamany (in Arabic) is found here:

The unedited audio of the full meeting is found here, including the question and answers session at the end, which is not in the first link because the sound quality of the questions is not very good, but it is audible:

He will soon be posting a video of the meeting which will include Fr. Bashar Al-Shamany's speech with English subtitles. Here is a preview:

We raised almost $10,000.00 for International Orthodox Christian Charities, to aid the refugees in Syrian, Lebanon, Jordan, and Iraq.
Posted by Fr. John Whiteford at 12:07 PM 1 comment:

Email ThisBlogThis!Share to TwitterShare to FacebookShare to Pinterest
Labels: IOCC, Persecution of Christians

Silent Holocaust of Christians in the Middle East: KPFT Interview

You can listen to the show by clicking here.
Posted by Fr. John Whiteford at 5:24 AM No comments:

A Sample Letter to a Congressman

It is important that you make you letter to your congressman and to your senators as personal as possible, you should not just cut and past this letter, and mail it in.  Also, it is best to send a written letter the old fashioned way, rather than simply sending this as an e-message. You can find out who your congressman and your two federal senators by putting your address into this web site: http://www.fyi.legis.state.tx.us/Home.aspx which will also give you their contact information.

The main points you want to make are:

1. Stop pouring gasoline on the fire by supporting Jihadist rebels.

2. Start getting humanitarian relief to the Christians and other victims of the Jihadists.

By the way, if you voted for the person you are writing, it doesn't hurt to mention that.

My name is X, I live in your district, and am writing to ask you about the desperate conditions that Christians in the Middle East are currently facing. I am asking that you use your influence to have our government stop throwing gasoline on the fire by supporting the rebels of the “Arab Spring”. I am also asking that we actively direct humanitarian aid to help displaced Christians in the Middle East. Furthermore, we need to actively seek the elimination of ISIS and other Jihadists groups that are rampaging across the Middle East.

Christians are being systemically slaughtered. Christian communities, which have been in existence since the days of the Apostles, are being destroyed before our very eyes. Virtually nothing is being done to prevent our brothers and sisters from being raped, robbed, sold into slavery, butchered, or buried alive. Those able to flee are being pursued with almost no international or American aid, and those who reach refugee camps are in wretched conditions at best. The Christian population, which was about 20% of the Middle East only a hundred years ago, is rapidly declining. It is now about 5%, and may completely disappear, if we allow things to continue on their present course.

The “Arab Spring” that our government has actively supported has resulted in turning Libya into a terrorist state. We actively supported the Muslim Brotherhood government of Egypt, which launched a brutal persecution of the Church -- which was only ended by a massive uprising of the people.  Our government’s policy of funding, supplying, arming, and training the so-called “Free Syrian Army” has also been a disaster, which has resulted in half of the population of Syria being displaced, Christians being massacred, ancient Christian communities being destroyed, and the creation of ISIS, which spread this violence into Iraq.

We must stop supporting the overthrow of secular governments in the Middle East. Assad is not a perfect ruler for Syria, but his government is the only force in Syria that is seeking to protect Christians. If you ask any Christians in Syria, they will tell you that they do not want to see the Assad government overthrown.

I am glad that our government has been able to help the Yazidi community in Iraq.  I wonder why our government ignored the slaughter and misery of Christians in Egypt, Syria, and Iraq, but came running when a sect that most of us had never heard of was in danger. Are we afraid to be seen helping Christians, because we are afraid Muslims will think we are taking sides? There are only two sides when it comes to genocide – the side of good and the side of evil. Anyone who is offended that any government would seek to help religious minorities who are being targeting for destruction is on the side of evil.  We should stop caring what they think, and start doing the right thing because it is the right thing.


I would like to meet with you at your earliest convenience to talk about this matter further.

Posted by Fr. John Whiteford at 7:34 PM No comments: 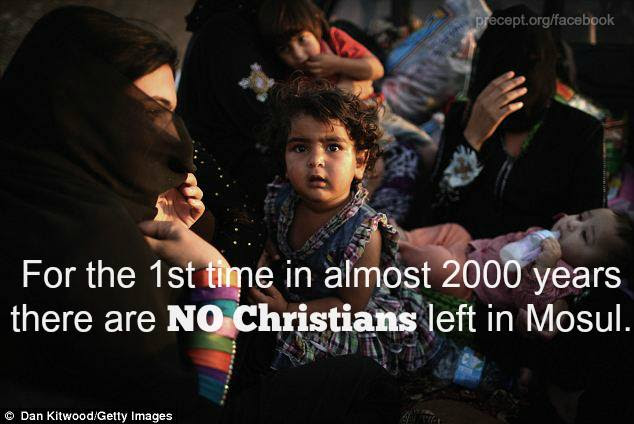 A compelling plea for the world to pay attention to the destruction of the ancient Christian communities of the Middle East, and to do something about it. Click here to listen.

And if you want to do something about it, please plan on attending the town hall meeting, The Silent Holocaust of Christians in the Middle East on Friday, September 5th, at 7:00 p.m., and contact your representatives to do something to help these people before it is too late.

Many thanks to Doyle Odom for the audio.
Posted by Fr. John Whiteford at 6:35 PM No comments: